SMS deposits are formed on the seafloor when hot water comes out of the seabed, hits the cold seawater and deposits its mineral load. 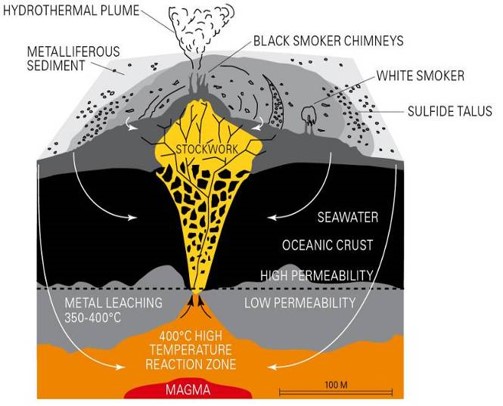 This process results in “black smokers” which are the visual appearance of minerals precipitating in the cold water. They were first discovered in 1979 at 21 degrees north on the East Pacific Rise near Baja, California, and they have since been found in all the world’s oceans.  Black smokers are arguably one of the great natural scientific discoveries of the 20th Century.  It can take hundreds of years for SMS deposits to form in this way and eventually, they become inactive.

A feature of SMS deposits is their high content of copper, gold, zinc and silver.

Neptune Minerals is focusing its efforts at SMS sites at the more prospective convergent plate margin sites which are dominant in the “West Pacific Ring of Fire” in water depths between approximately 500 and 2500 meters.

SMS deposits are considered by geologists to be the modern equivalents of ancient massive sulfide deposits that have been, and continue to be, mined on land today.